Almond oil is used in many cosmetic products and as a snack in confectionery (marzipan, "turrón",
nougat), food products (almond milk, ice cream, chocolate), culinary recipes and also cosmetic base. Seeds of 18
almond genotypes and cultivars: Azar, Rabie, A200, Shahroud13, Zodgol2, A230, Tuono, Shahrekord1,
Shahroud 21, Najafabad, Nonpareil, Zodgol1, Yalda, K12-8, Supernova, Shekofeh, Sahand and Sefied were
obtained from research station of Seed and Plant Improvement Institute of Karaj and then analyzed for oil
content in 2008 and 2011. 10 almond kernels from each genotype and cultivar of almond with 3 replications
were examined individually. Oil extraction methyl esters were done in one step. Results showed significant
variation between genotypes and cultivars and some degree of different years. Oil content varied from 58.8% to
43.85% of the total kernel dry weight. According to these results, almond genotypes and cultivars based on oil
content were divided in four groups: high (55-60%), good (50-55%), medium (45-50%) and poor (less than
45%). 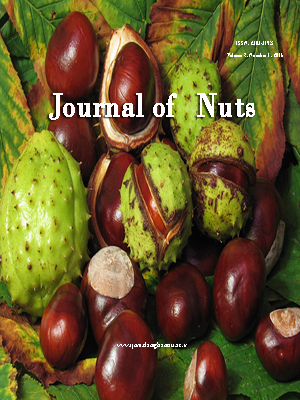